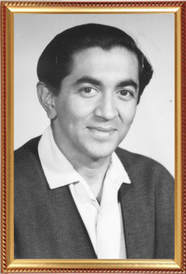 This page in under construction
Ravi was the youngest of Dr Matthai and Achamma’s children, born in Trivandrum on the 6th August 1927.  He joined the Doon School and then went to Allahabad University.   Four years later, he went to Balliol College Oxford where he graduated with a PPE (Politics, Philosophy and Economics) degree.

He worked for a British Managing Agency for some years in Calcutta, till in 1963 he joined the Faculty of the Indian Institute of Management, Calcutta.

In 1965, Dr Vikram Sarabhai persuaded him to join the Indian Institute of Management Ahmedabad as its first Full Time Director, a post he held till he voluntarily stepped down as Director but remained on the Faculty till his death in February 1984 in London after a cardiac surgery.

After he relinquished his post as Director, he started an educational experiment which he called the Rural University.  Its objective was to teach people from the informal sector to develop skills to improve their lives. ​
Kindly click on the below links to know more
Others
© COPYRIGHT 2016. ALL RIGHTS RESERVED